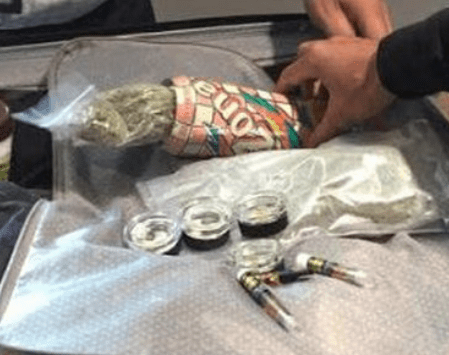 When the U.S. sends its people to Costa Rica, it’s not always sending the best.

N.F.L. player and New England Patriots safety Darrell Hammond was arrested at the San Jose airport in Costa Rica for possession of Marijuana.

According to sources Harmon possessed 58 grams of marijuana.

He tried smuggling the marijuana into the country with an Arizona iced-tea can (no reports yet on what flavor).

He also brought three pipes with cannabis oil, a THC candy, and four containers with compressed marijuana that weighed 4.3 grams, all of which were in his suitcase.

He was briefly detained before being sent back to the United States.

Hammond is not the only Patriots player looking to visit Costa Rica for some rest and relaxation.

Tom Brady is a frequent visitor and also owns a home in Costa Rica.

Other celebrities have had run ins with the law in Costa Rica, including Justin Bieber who was banned last year from a popular tour.

We can at least hope Hammond knew Costa Rica is not an island unlike the Kardashian clan.

If not, we probably know why…