Costa Rica military boats made in the U.S.A. arriving soon

HomeCosta Rica military boats made in the U.S.A. arriving soon 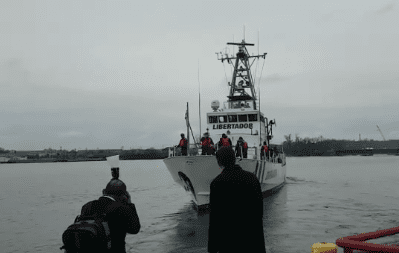 Costa Rica’s military is about to receive two boats thanks to the generous donation of the United States government.

The boats were sent off from Baltimore in the video below:

The patrols boats should reach Costa Rica by the end of April.

Roman Macaya, the Costa Rica ambassador to the United States had this to say about the new boats.

For three months, 47 members of the National Coast Guard Service have participated in an intense training in Baltimore. We can now say that this Coast Guard Service is the most professional, best trained, and equipped that Costa Rica has had in history. As soon as they arrive to Costa Rica they will incorporate to the active service and will project the presence of the country over the totality of our exclusive economic zone. This is not a minor thing, since our exclusive economic zone in the Pacific has an area approximately eleven times the size of our terrestrial area. For the first time we will be able to patrol the waters past Isla del Coco. These ships will be indispensable in search and rescue missions, illegal fishing control and in the combat of drug trafficking; however, the most valuable resource is the human resource.

This is the 2nd big gift from the United States to Costa Rica’s military.

Just a few months ago Costa Rica received 3 armored military vehicles that failed to pass inspection in Costa Rica. No word yet on if the boats have to pass RITEVE.