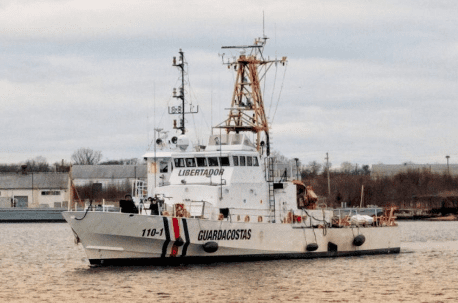 Looks like Costa Rica’s military is getting even larger thanks to the recent donation of 2 de-commissioned U.S. Coast Guard boats.

The recent donations are in addition to the 3 armored vehicles the U.S. just gave to Costa Rica.

Here’s the full statement from the U.S. embassy about the military vessels:

The members of the two crews that will be in charge of the two 1110 feet cutters that the United States donated and already transferred to the Costa Rican National Coast Guard Service already arrived to Baltimore.

The 44 Coast Guard officers are in the Baltimore U.S. Coast Guard shipyard for a three-month training that will allow them to command, navigate and give maintenance to the cutters.

At the end of the training, Costa Rican officers will depart from the United States to Costa Rica onboard of the cutters and with two U.S. Coast Guard officers that were in charge of these cutters in the past.

Here’s a photo of the Costa Rica police officers training in snowy Baltimore: