Costa Rica is the happiest country on earth…again! 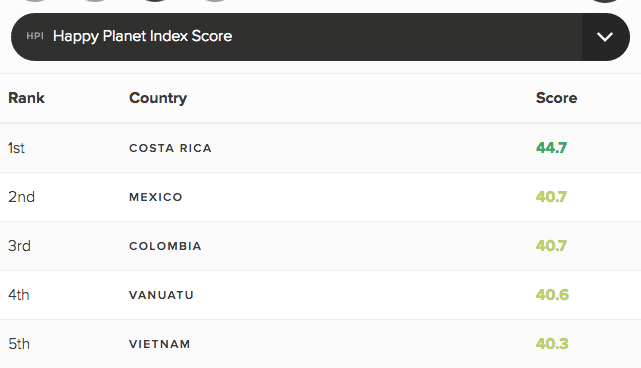 Costa Rica has once again reclaimed its #1 spot on the Happy Planet Index for the happiest country in the world.

According to the folks over at Happy Planet Index, “people living in Costa Rica have higher wellbeing than the residents of many rich nations, including the USA and the UK, and live longer than people in the USA. And all of this is achieved with a per capita Ecological Footprint that’s just one third of the size of the USA’s.”

The rankings are based on 4 criteria: Life Expectancy, Wellbeing, Ecological Footprint, and Inequality.

The report is not all roses and sunshine though. They have a few recommendations for Costa Rica

Income inequality in Costa Rica is particularly high – in part because Costa Rica’s tax system does not effectively redistribute wealth across the population. And while Costa Rica’s commitment to environmental sustainability is impressive, its Ecological Footprint isn’t yet small enough to be completely sustainable.

For the curious, the African country of Chad placed last in the Happy Planet Index rankings.