Why I’m not going to Envision Festival 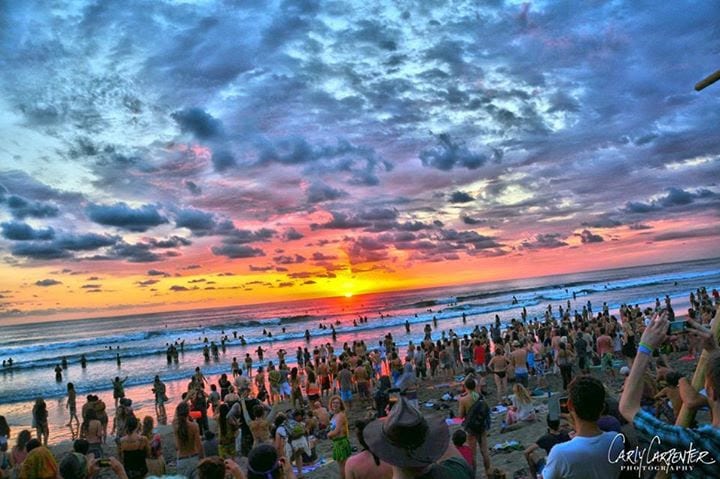 If you live in Costa Rica, visited or plan to visit, you have probably heard about Envision, the super earthy, spiritual, yogi, peace loving festival. Many of my friends and people I meet are going. I am not. Being a diehard yogi, when I first heard about Envision I have to admit I was a little curious. However, after looking into it, I was not even close to being sold. Thanks, but no thanks (for that bridge to nowhere).

My main reasons for not going are that Envision is run by a group of marketing geniuses who have effectively brainwashed an audience; and attendees are actually limousine liberals, which is a nice way of saying liberal hypocrites. I attended a Budakon retreat a few years back and experienced these things first hand so my comments aren’t blind.

The Budakon founder, Kancho as they call him, is also an expert at marketing. He along with his minions constantly remind others that he personally trained Jennifer Aniston and Courtney Cox in Budakon when he first developed the practice. What he is actually doing is telling his audience of limousine liberals that two well-known, loved limousine liberals endorse what he is selling. Kancho’s other brainwashing tactics, leave you feeling like you need him and the Budakon family in order to solve all your problems and move into a state of bliss.

So back to Envision…it promotes “zero impact” on the space used, which in their language means they clean up and leave it as good as they found it. Yet, they also tout how many countries are represented at the event. What about all carbon/environmental impact from these flights? Oh or were you all planning to sail to Costa Rica to be carbon neutral?…didn’t think so.

Despite all the environmental talk among attendees, the event does have quite the impact on the local community where Envision takes place. Talk among the community addresses concerns about environment and beach damage.  There are also concerns about safety as well as water and food shortages due to the high volume of people in the small down. Many of the locals worry about their children. Here’s what two locals have to say about it:

The other Envision marketing language of “magical, self discovery, co-exist, inspiring, transformative experience” appears everywhere. I have yet to read something (whether a blog, news website or Facebook comments) that doesn’t copy the official Envision language nearly exactly. This tells me people are so bought into the idea of Envision that they believe and repeat whatever is told to them.

People going hate capitalists yet capitalist ideals are heavily represented – oh the contradiction. The organizers and owners of the event are obviously capitalists and want to make money off the attendees. Just look at their list of pre and post retreats. The real “vision” the owners and promoters of this festival see are large dollar signs as they fill their pockets with colones and dollars. Additionally, even though the event promotes diversity it lacks gender balance and ethnic inclusion in its leadership roles. The Envision website shows a leadership team of eight, with the majority being white males. Only two are women, who also appear to be white.

Companies and creative entrepreneurs also find ways to make money off the Envision attendees. I have a friend who bought Burning Man tickets (if you haven’t heard of it, Burning Man is a similar radical cultural event set in the desert) for the sole purpose of reselling them to make money. He sold them for double the face value to a New York elitist a.k.a. limousine liberal. This happens with Envision tickets too.

While we’re on the Burning Man topic…it actually released an annual report in 2014. Envision doesn’t release an annual report but there are some interesting data points that I’m sure Envision fans would love to hate, and it leaves me wondering where Envision stands on these numbers. In 2014 Burning Man brought in $32,364,009 with earnings of $2,350,498 (because Burning Man is now a 501(c)3 this is technically not considered a profit). I wouldn’t exactly call that pocket change. It spent half a million dollars on “vehicle maintenance and fuel,” which is for the 100 truck fleet it owns.  Another half a million dollars was spent on “travel, conventions and conferences,” which goes to staff travel and professional development though a breakdown between the two is not provided. More than $800k in printing, reproduction and office expenses. That adds quite a bit to the carbon footprint!

If you’re looking to impact the world, reduce your carbon footprint, and engage in a “sustainable community,” maybe it’s best not to board a gas guzzling, carbon spewing jumbo jet down to Costa Rica for Envision.

Birdie --- An American in Tamarindo, Birdie loves breaking stereotypes and the melding of contrasts. She is a yogi; a conservative; a Wall Streeter; an anti-feminist; a health-foodie; a coffee addict; a future sommelier; a beach bunny; and a snow bunny.
Search
Most popular articles
Upcoming Events