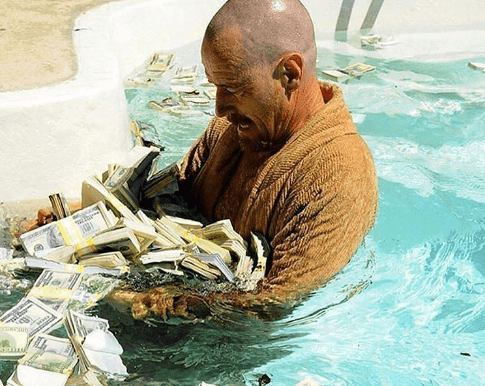 There is no simple answer to this question, so we’re going to break it down for you into a few parts to take the mystery out of the question about using U.S. dollars in Costa Rica.

Many shops, restaurants and business will not accept torn bills here.

Even bills that have the slightest tear will not be accepted. So when you’re bringing U.S. dollars down with you, make sure they are new, crisp, and complete notes.

The other thing to remember is that sometimes it’s much more favorable to pay in the local currency than in U.S. dollars

If you pay a restaurant bill with cash in U.S. dollars, you will often be overcharged by as much as $5 to $10 depending on the size of the bill.

Here’s a receipt from a restaurant in Costa Rica with the total in the local currency of colones (7,119) and in U.S. dollars ($15):

This receipt is a textbook case of when you do NOT want to pay in U.S. dollars.

At the time of this purchase, $1 U.S. dollar was equal to 550 colones. On the receipt it says that the restaurant is using the exchange rate of 500 colones per U.S. dollar (That’s what the “Tipo de Cambio” with the 500.00 to the right of it means).

This is something to be aware of when you’re traveling Costa Rica. A simple way to avoid the exchange rate ripoff is to use your phone’s calculator and divide the total in colones by the total in dollars and see if it matches up with the current exchange rate.

Don’t let this keep you from bringing U.S. dollars to Costa Rica. Sometimes you can get better deals from tour agencies, souvenir shops, and hotels if you pay in cash.

The credit card machines in Costa Rica are notorious for their high fees and surcharges, so many places will be happy to take cash instead.

Also, do not exchange money at the airport! They will give you a very unfavorable exchange rate.

My best advice would be to open up a checking account with Charles Schwab and bring their debit card with you to Costa Rica. This debit card will reimburse all your ATM fees in Costa Rica (which average around $4 per transaction).

Plus, the Schwab account has no minimum and no fees so you can put in the $1,000 in cash you think you’ll need for your vacation, and withdraw the money once your down here.

When you withdraw money from your Schwab account here in Costa Rica you can request both U.S. dollars and colones. The rate they give you for colones will be the equivalent or better than a lot of the banks here in Costa Rica.

Having a mix of both U.S. dollars and colones is the best way to travel the country.

If something is advertised in colones, pay in colones.

But always be aware of the exchange rate the business is using!

With these tips you should have a worry free experience down here in Costa Rica.

0
« Is there crime in Costa Rica?
26 things only people who lived in Costa Rica will understand (photos) »
Search
Most popular articles
Upcoming Events