Why Learning To Surf and The Hunger Games Have Everything and Nothing To Do With Each Other: Top 5 Ways To Choose A Surf Instructor

HomeWhy Learning To Surf and The Hunger Games Have Everything and Nothing To Do With Each Other: Top 5 Ways To Choose A Surf Instructor 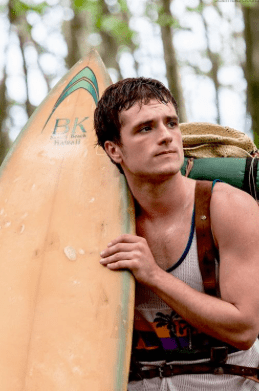 Katniss Neversurfs and Peeta Kookshark are months away from accomplishing their surf dreams to win the 74th annual Munchie Games.  Katniss and Peeta are training for the upcoming surf competition in the Surf Capitol, ruled by an evil surf tycoon, President Surf.  This is a story, that will make little, if any sense at all, about two starred-crossed surfers on a quest to conquer the Surf Capitol and become champions of the Munchie Games.

Fast forwarding to the end of a long and pointless story…

After Katniss wins the 74th Munchie Games (Peeta Kookshark finished in an unimpressive 2nd), Katniss Neversurfs returns home to District Inland. President Surf visits Katniss at her home and explains that her “gnarly ripping” in the Munchie Games has inspired kooks across the inland districts to learn to surf too. He orders Katniss to use the upcoming Victory Surf Tour to convince him that her dope surfing was out of genuine love to surf… and not an attempt to steal sponsors away from  Surf Capitol surfers. If he discovers she acted in defiance against the Surf Capitol, by being super cool, he will ruin Katniss’ surf dreams forever, taking away all her sponsors.

As the Victory Surf Tour nears, Katniss and Peeta reminisce about their beginning days as surfers and their first Surf Instructor, Haymitch Amberjack. Oh Haymitch, the memories of those first waves, all of his encouragement and skillful tips- Katniss tears up just thinking about all of the good times during her and Peeta’s first lessons with Haymitch.

So if you aren’t confused enough on either the point of this article or its relation to a twilight zone, surf version of The Hunger Games, refer to the damn title and reevaluate your boredom level. But, to become champions, Katniss and Peeta had to start somewhere…learning to surf with Haymitch.

What was Haymitch’s secret as a surf coach to make their surf dreams come true you ask? I have been entrusted with Katniss and Peeta’s secret list of the top 5 things to consider when choosing a surf instructor to become Champions of the Munchie Games, defeat President Surf and The Surf Capitol while inspiring inland kooks everywhere!

1. Surfing isn’t a team sport, you are the boss of your surfing in the lineup. Any surf instructor that insists his/her methods are the only correct techniques that exist, just doesn’t know what they’re talking about. Surfing is very personal and can be adapted to your body or unique style. You might have previous injuries or enjoy surfing certain types or shapes of boards, don’t let anyone determine that for you. (This one is for the intermediate surfer looking to get to the next level)

2. For beginner or first time surfers, you must learn the basics first. Any instructor that doesn’t emphasize the importance of the basics isn’t putting you on the correct path to be a champion

3. Confidence. Confidence is huge in surfing at any level. An instructor that is negative or unsupportive of your efforts, doesn’t deserve your time.

4. Patience. Not only is it extremely important for your instructor to be patient while you’re learning the hardest sport in the world, it is even more important for you to be patient with your instructor. Trust what you are being taught and go for it. Sometimes, language barriers can restrict very talented instructors from connecting with you in a perspective easiest for you to understand. So be patient and ask questions. Remember, as a student you are there to learn, so do so and communicate with your instructor in between sets as much as possible. Too often beginner surfers are too passive and are not inquisitive about the techniques they are being taught.

5. Fun. That’s F-U-N. It means having a good time. Every instructor should make it clear, the numero uno reason you are in the water is to have fun. Even if you are on a path to be Surf Capitol Champions and legendary kooks like Katniss and Peeta, it is still about having fun. If you’re not having fun with an instructor, ditch them and find someone ready to have a good time!

Thanks for reading and supporting the Weekly Crawler!

Tommy is a photographer/surfer who is most likely to either be seen surfing the barrels down at the river-mouth or cruising around town on his motorcycle. You can check out his photos at Bad Fish Photography.
Website
Search
Most popular articles
Upcoming Events