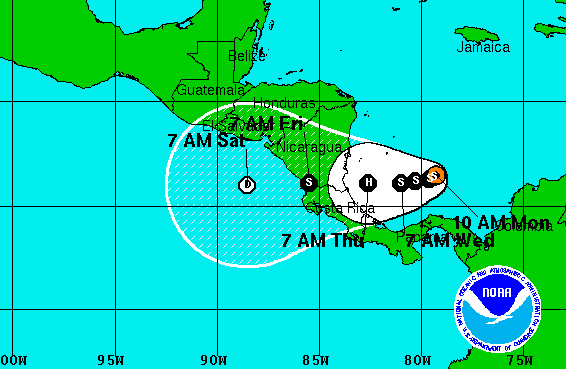 It’s a good thing the Niña, the Pinta, and the Santa Maria are safely docked back in Spain. Forecasters at the National Oceania and Atmospheric Administration are predicting a hurricane to make landfall on Costa Rica’s Caribbean coast this Thursday, November 24.

Here’s the full forecast from NOAA:

The cloud pattern of the tropical cyclone is gradually becoming better organized, with some banding features over the northern and western portions of the circulation and small bursts of deep convection near or over the estimated center.

The current intensity is held at 30 kt in agreement with a Dvorak estimate from TAFB, pending an Air Force reconnaissance mission into the cyclone this afternoon. There is moderate south-southeasterly shear over the depression, and this should allow for only slow strengthening over the next day or two.

In 72 hours or so, some relaxation of the shear is forecast with an upper-level anticyclone developing over the tropical cyclone, and the system is predicted to become a hurricane before landfall. The official intensity forecast is the same as the previous one, and is close to the latest SHIPS model guidance. Satellite-derived center fixes indicate little motion since late yesterday.

The depression is currently located near a col in the mid-level flow, so steering currents are very weak at this time. Global model guidance shows a high developing to the north of the system in a few days, so a generally westward track is forecast. The official track forecast is mainly a blend of the ECMWF and GFS tracks, with the former model being faster and farther south and the latter being slower and farther north.

The new official forecast is very similar to the previous NHC forecast track. There is a lot of uncertainty as to whether the system will survive as a tropical cyclone while crossing Central America later in the forecast period. The current thinking is that the interaction with land and increasing shear will reduce the system to a remnant low by the time it reaches the east Pacific.

The current track has the system moving across northern Costa Rica:

For up to date info be sure to check out NOAA’s site.

0
« 9 reasons why Clos is better than a boyfriend
7.0 magnitude earthquake hits off Nicaragua Coast »
Search
Most popular articles
Upcoming Events